Just how brutal is the Spine Race?

Imagine running the best part of a week, carrying a rucksack full of kit, over a 268-mile course that has more ascent than Mount Everest, while being battered by Arctic-like -15C winds and trudging through fresh deep snow. Oh, and having to regularly de-ice your frozen shoes with warm water. Welcome to the 2023 Spine Race!

Pictured: Damian Hall de-icing his inov-8 trail shoes at the finish of The Spine Race 2023

Last Sunday saw 158 brave ultra runners toe the start line of ‘Britain’s Most Brutal Race’ in Edale, Derbyshire. Ahead of them, a monstrous adventure north up the Pennine Way trail to Kirk Yetholm in the Scottish Borders, with 37,000ft of uphill running thrown in for good measure.

One of the world’s toughest ultramarathon events, the Spine Race is notoriously savage and every year sees many of its starters fall by the wayside amid high levels of exhaustion and plummeting temperatures. The 2023 edition was no different.

However, as some runners retired, others stood strong and resilient. Among them were inov-8 athletes Damian Hall and Jack Scott.

The pair bravely fought it out at the front of the race, choosing to sleep only for 2 hours each throughout the race’s entirety. In the end, after a battle that had seen both men spend time in the lead, Damian prevailed in a new men's record time of 84 hours 36 mins.

Jack finished right alongside the winner, touching the wall of The Border Hotel at the same moment on Wednesday night, but with a 41-minute time penalty - for an accidental shortcut taken - added to his time.

Pictured: Damian Hall and Jack Scott touching the wall of The Border Hotel at the same moment

For ultrarunning legend Damian, it was his first Spine Race win at the fourth attempt. He said: “It has been a long-held dream to win the Spine Race. I first did it in 2014 finishing 4th but never thought I was someone who could win it. Then last year I did think that but retired after 180 miles with an injury. That really frustrated me, and that feeling has been bubbling away for the past 12 months. I wanted to come back this year and do better. Jack pushed me incredibly hard for the win and I’m really pleased that between us we ran the second than third fastest times for the course.”

Pictured: Damian Hall at the finish

Unfortunately for Jack, the time penalty did him no favours. He actually incurred a 48-minute time penalty for an accidental navigation error that resulted in him taking a shortcut in the woods. However, that was cut to 41 minutes when he gained a 7-minute time credit for helping a fellow runner in need. This penalty was added to his time at the finish, meaning he finished in a brilliant second place with a time of 85 hours 16 mins – the second fastest man since the event started in 2012.

The 28-year-old, who like all the runners had to de-ice his shoes with warm water at checkpoints such were the freezing conditions, said: “It was an amazing three-and-a-half days. I was blessed to have the opportunity to run with Damian, and to race him. I thoroughly enjoyed it, and Damian fully deserves first place. I think we both only slept about 2 hours each throughout the race and at times the weather up on the tops was barbaric.”

Pictured: Jack Scott at the finish

-
Both Damian and Jack missed out on lowering the overall course record, set by female ultra runner Jasmin Paris in 2019. Her incredible time of 83 hours 12 mins still stands firm.

Jack, for whom it was a first Spine Race finish having failed to complete in 2020, added: “Maybe we could have pushed closer to the overall course record if the conditions had been better, but Jasmin’s time is awesome.”

Talking about the navigational error he made and the rescuing of a fellow runner in need, Jack – a running coach who found the sport while overcoming a gambling addiction – said: “I knew I’d made a mistake. I got to a micro-checkpoint a few miles later and told the medic if he could message the senior organising team to tell them I apologise for making a mistake that saved me about 25 minutes. I’m blaming the lack of sleep!

“The runner I helped was in one of the other Spine Race events and stranded in no-man’s land above Greenhead. He was having trouble with his GPS unit and asked if I could help him. I showed him where we were and he was then able to follow me. I think the safety team then got him down off the trail. It was only 7-8 minutes and wasn’t a problem.”

Pictured: Jack Scott (L) and Damian Hall (R) enjoying a beer together at the finish

Damian, himself a running coach and also a climate-emergency campaigner, beat the previous men’s record held by John Kelly, who ran 87 hours 53 mins in 2020. He fuelled on vegan-based foods and cups of tea during his epic adventure along the mountainous backbone of England. Jack was also well inside John’s time.

As one of the co-founders of The Green Runners – a running community making changes for a fitter planet – Damian used much of the same inov-8 kit he had 2022, plus the new ROCLITE ULTRA G 320 shoes. He wore the one pair for the whole race.

Jack also started in the ROCLITE ULTRA G 320 shoes but opted to switch into the X-TALON 255 during the race.

Find out more about off-road running by visiting our trail running hub and make sure you've got all the running kit you need for your next adventure.

Welcome to the SportsShoes Trail Hub! We’ve teamed up with the experts to bring you the very best advice in all things trail - from training, to nutrition and even motivation.

Alongside tips from you, our trail community, and the latest news and releases, we hope we’ll inspire you to run stronger, better and happier – because as we know, it’s no fun standing still. 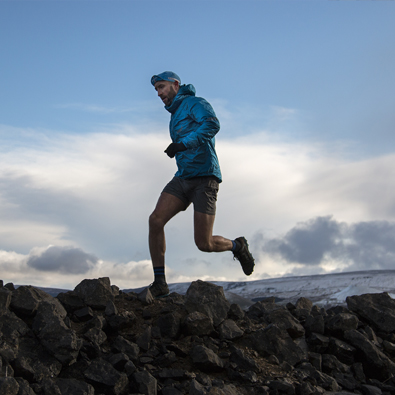 Please wait while we authorise your payment.

Sorry, there was an error with PayPal, please try again later or alternatively use another payment method.